Epidemiology of Severe Trauma in the Head-Neck Region in Albania 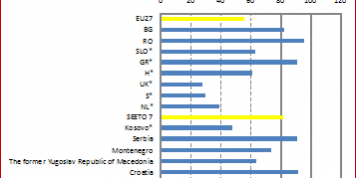 Background: Injuries are the fourth most common cause of death, after cardiovascular diseases, cancer, and respiratory diseases. Head trauma occur in 50% of cases in road injuries. Head and neck trauma results in a range of injuries, spanning minor lacerations to life-threatening airway compromise. The aim of the study was to give an the epidemiological overview of severe traumas in the head-neck region in Albania.

Material and methods: This cross-sectional study included patients with severe head and neck trauma and trauma  of ORL region who were hospitalized at Trauma University Hospital (TUH) in Tirana Albania over the year 2015.

Conclusion: These data have implications for head and neck injury surveillance and may be also used to risk-stratify patients who present with injuries in the acute care setting.

A traffic collision, also known as a motor vehicle collision (MVC) among others, occurs when a vehicle collides with another vehicle, pedestrian, animal, road debris, or other stationary obstruction, such as a tree or utility pole. Traffic collisions may result in injury, death and property damage. A number of factors contribute to the risk of collision, including vehicle design, speed of operation, road design, road environment, and driver skill, impairment due to alcohol or drugs, and behavior, notably speeding and street racing. Worldwide, motor vehicle collisions lead to death and disability as well as financial costs to both society and the individuals involved.

Road injuries occurred in about 54 million people in 2013.[1] This resulted in 1.4 million deaths in 2013, up from 1.1 million deaths in 1990.[2] About 68,000 of these occurred in children less than five years old.[2] Almost all high-income countries have decreasing death rates, while the majority of low-income countries have increasing death rates due to traffic collisions. Middle-income countries have the highest rate with 20 deaths per 100,000 inhabitants, 80% of all road fatalities by only 52% of all vehicles. While the death rate in Africa is the highest (24.1 per 100,000 inhabitants), the lowest rate is to be found in Europe (10.3).[3]

Injuries are the fourth most common cause of death, after cardiovascular diseases, cancer, and respiratory diseases ne EU. Every two minutes one EU-citizen dies of an injury. For each fatal injury case, 25 people across the EU are admitted to hospital, 145 are treated as hospital outpatients and many more seek treatment elsewhere, e.g. by family doctors. Injuries due to accidents and violence are a major public health problem, killing more than 230 000 people in the EU-27 each year (annual average 2008-2010) and disabling many more. This means that each year a staggering 5.7 million people are admitted to hospital and 33.9 million people are treated as hospital outpatients as a result of an accident or violence related injury [ ]. Almost 55% of deaths occur in young people aged 15-44 and 75% of them occur in men rather than women. Road traffic trauma are the leading cause of death among young people aged 5-29 years. Trauma is the leading cause of deaths under the age of 45 years. Head trauma occur in 50% of cases in road injuries. Road Safety is a major societal issue. Although road fatalities represent a downward trend in 2014, more than 25000 people died on the roads of the European Union, i.e. the equivalent of a medium town. For every death on Europe’s roads there are an estimated 4 permanently disabling injuries such as damage to the brain or spinal cord, 8 serious injuries and 50 minor injuries. Accident –related trauma was almost unfamiliar to Albanians till 1990 when our country sought to escape its self-imposed isolation and started to open up to the world. The increased number of cars coupled with heavy traffic in the streets consequently brought an increase in road accidents, which in turn resulted in more seriously injured people and more traffic deaths. Even though there has been some improvement made in the road infrastructure, the level of accidents in our country is still very high and so is the number of deaths caused by these accidents. It is calculated that there have been  X (numri) accident-related deaths from 2006 to date. The aim of the study was to give an the epidemiological overview of severe traumas in the head-neck region in Albania.

This cross-sectional study included patients with severe head and neck trauma and trauma  of
Otorhinolaryngology (ORL) region who were hospitalized at Trauma University Hospital (TUH) in Tirana Albania over the year 2015. Post-traumatic damages often are of primary importance, but in many cases they are treated as a matter of secondary importance, since it is essential to first deal with the head trauma which implies that of the central nervous system.

The causes of trauma have been divided into five groups:

In the “Trauma from Automobile Crashes” group   we have included all the cases where automobile crashes were the ones which caused the trauma including the trauma on the driver, passenger, and pedestrian – caused by all types of vehicles.

In the “Trauma from work-related accidents” we have included all the trauma cases that were caused by an accident during work.

In the “Trauma from Gun-related injuries” group we have included all the trauma cases that were caused from firearms injuries.

In the “Cold weapon-related trauma” group, we have included all injury cases which are caused by sharp or heavy weapons.

The distribution of causes of trauma by gender is shown in table 3.

Table 3. Distribution of causes of trauma by gender

As noticed from table 3, there is a statistically significant difference between males and females regarding the cause of trauma.

A total number of 1536 patients presented to emergency department due to multiple traumas and all showed signs of damage in the Otorhino-laringology (ORL) region. 320 patients out of them were hospitalized and involved in this study.

The data at table 1 indicates that a total of 14608 patients showed up at the emergency department of TUH during the study period. 13072 or 90.5% of them had no head and neck injuries whereas 1536  patients revealed signs of damage in the ORL region and this number corresponds to a prevalence of 10.5% of all patients with trauma in general, whereas 320 patients were hospitalized, which in turn corresponds to a rate of 12.7% of all hospitalized patients. 320 (20.8%) patients with severe had and neck trauma were hospitalized, representing 12.7% of all patient hospitalized with trauma.

The head to neck trauma was studied according to sociodemographic characteristics of patients andd patients. Table 3 indicates that male gender is dominant in comparison to the females for all causes of trauma. This indication is clearly observed in all trauma reports. All the data related to trauma in Albania is comparable to the data of other developed countries and especially U.S.A  regarding hospitalization, with about 16% of the total number of traumas, whereas the prevalence of injuries in ORL area is lower, 6.6%-7.8% of the total trauma cases [  ].

Trauma in general and especially the trauma caused by road accidents are ranked among the first causes of illnesses for people under 40 years old, illnesses that start in an acute form and continue for a long time perhaps with detrimental health effects. It is vital for the trauma to be studied in comparison with age, since it takes the first place for age-related illnesses in the world’s literature. It has a bad impact on the personal aspect and social one, since it is very costly to be cured. In Albania part of the cure is paid for by the state and the remaining part from the individual himself or his family. What we mean by social impact is that trauma often requires a long rehabilitation or causes diability in the patient and this cost must also be paif from the society at large.

This study provides a landscape analysis of head and neck injuries in Albania. In 2015, there were over 14000 head and neck trauma that ranged in severity from minor lacerations to penetrating wounds. These injuries infrequently result in admission to a hospital and require intensive care treatment. These data have implications for head and neck injury surveillance and may be also used to risk-stratify patients who present with injuries in the acute care setting.