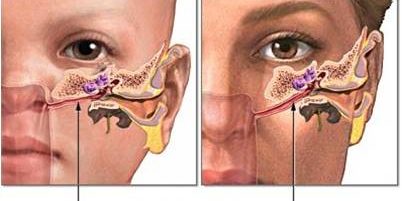 Material and methods: Study is based in simple randomized selection. Chosen test was Chi squared test. This is a epidemiological transversal study. 1054 children were screened, divided in five age based categories. Sample’s fraction 1,7%.

Tympanic effusions are much more than those presented to doctor because of symptoms. TE have significant relations to upper respiratory airway infections. TE without complains appear and resolve spontaneously, cases that  persist for a longer period, may be complicated  to other more difficult diseases to treat with easy interventions, and are associated with learning and speaking difficulties, and can lead to intellectual impairment.

All categories have approx. same numbers

School performance is divided in three categories according to scores, physical development and artistically abilities.

Tab 2 Prevalence of TE according to age

No significant relations between TE and age, shown from chi squared test. P=0.23

Table 5. Male/female ratio with TE, according to age

Chi squared test has shown a significant relation (association) between male/female ratio between effusion and age. P=0.05 TE are more frequent in boys.

No statistical significant relation between TE and family conditions has been able to be shown.P-0.17

Table 7. Ratio between school performance and TE according to age

No statistical significant relation between TE and school performance   has been shown.P=0.19

According to screening s data, tympanic effusions without complains was present in 17% of children .Table 1

This results higher than in previous studies in our country (14),(11), which show a incidence of TE  12 %, this  dedicated to  technical evolution, using of tympanometric equipment, which remains high quality evaluation of middle ear effusions(9). Prevalence of TE statistically results the same in different groups. Table2.

TE. Children that resulted with effusion did not had complained pain or had not been treated for diseases related to ear. Not finding any infection focus in over 50% of children supports hypothesis of unknown pathogenesis of TE.(1),(5)

We believe that some children of risk for developing Tympanic Effusion escaped the screening because this study is carried out during winter and probably a part of children were absent to school because of acute flu, so they missed the screening.

Other studies point out that are two peaks of TE exacerbations 6-36 months and 4-7 years old. (6),(8). This was not possible to be shown in our study where the first one was not included on the study and the second was categorized in one group -age that resulted with the same incidence to the others.

Variation of the age was from 4-10 years, but children 4-6 years old were categorized in 6 years old children category, so we lack the data for each separate year of life.

Incidence of upper respiratory infections in relations to age groups was not significant statistically important.

Incidence of effusions related to different socioeconomic situation (living conditions, incomes, cultural level), resulted the same, this make in evidenced that TE is a disease of all social levels and the severity as well. Table 5

Our data are similar and comparable with other authors from different countries, despite different health care system and socio-economic level.(13)(15).

As a transversal study, we could not dynamically evaluate the evolution of TE in time.

Hearing impairment leads to attention lack and so it may affect learning but this needs more extended in time studies, because consequences would be obvious in the future.(7)

Conclusions: TE  are a frequent disease, they appear with the same frequency in all different levels of society, have significant relations with upper respiratory airways, and with other factors also, which interfere to their prognosis.