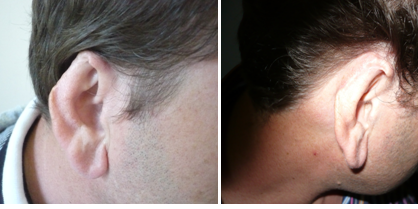 Background: Various reconstructive techniques for partial traumatic ear amputations have been reported. The choice of technique is based on the missing ear components and the availability of tissue for defect coverage.

The goal is to obtain an aesthetically acceptable ear. The authors report a two-stage skin flap pocket technique for the reconstruction of traumatic ear amputations.

Patient and Method:  We present two cases of partial traumatic ear amputation due to bite from a human being. Graft from the nasal septum is taken in both cases after performing a septoplasty. After taking cartilaginous graft from septum, an refreshments of the edges of amputation is performed and fixation of the graft with the cartilage of auricle in the place of amputation and then its insertion with auricle cartilage in amputation location and insertion in subcutan retroauricular pocket

Both cases underwent to a second intervention after three months, where dislocation from retroauricular region, dislocation of auricle is performed and its modeling.

Results: In 2 months follow-up, all of 2 cases showed no signs of infection. Normal dimension of the ears were achieved and aesthetic appearances were perceived as acceptable to the patients and other viewers. One patient

was able to be followed one year post surgery with acceptable aesthetics, and no sign of cartilage absorption.

Summary: The technique used in these cases provided acceptable results in reconstructing the size and shape of the partially amputated ears. Septal cartilage grafts implanted in the pockets retained their shape with no infection or absorption.

Traumatic partial amputations of auricle is favorised  from exposed position of the ear related to the head. Reconstruction of partial amputations presents difficulties related to the architecture and structure of auricle, when we have a fragile cartilage and thin skin. Different interventional techniques are use to repair the defect.. Expander of damage and the defect itself are decisive factors in choosing the mode of reparation.

Upper part, middle part or lower part must be the amputated part. Amputations in vertical plan must encompass only helix, but antihelix may be compromised as well. Direct reparation is performed when a loss smaller then 1or 2 cm is missing. When we face bigger amputations we need a reparation and reconstruction plan 1,2]

Bigger defects must be corrected using amputated cartilage, cartilage from ear s chonchaes of the other ear, cartilage from the rib, or nasal septum cartilage. In this kind of defects auricles reparation is done in two steps. First phase is taking the graft and adapting with amputated part, inserting in retro auricular region and the second phase is dislocation and final modeling.

The cause of amputation was the bite from another human being. Graft was taken from nose cartilage and they had septoplasty because of a deviation of septi nasi.

On the first phase we performed septoplasty and we took cartilage septum, refreshment of amputated region edges and fixation of graft with residual cartilage of auricle. In retroauricular region was created a subcutan pocket  in sizes of graft. We did adaptation of  graft in fosse retroauriculare, suturing skin in amputation level.(

Second phase was started three months after skin and graft vitalization happened, then we did dislocation and auricle remodeling. (Fig.2,5) .

On the end of the second phase auricle was modeled, in order to reach the shape and anatomical size.(Fig. 3). Removing stitches stared on 10 th day and continued to 14 th day. Following up this cases after a month and later on, the auricle took the a very good anatomical and esthetical shape

Patients were satisfied too. Results have been esthetically sustainable esthetically and no graft absorption was noticed in both cases (the first one I 5 years and the second one in one year .  (Fig. 6).Another bonus was improvement of nose breathing.

Figura 3.   Appearance after elevation of the auricule  at the second stage technique.

There are a lot of techniques for reconstruction of partial amputations of auricle, but choosing the right interventional technique is upon the size, place and amputation time.

Esthetically, upper amputated part of the ear, position of the auricle in the head hair line, and hair style are very remarkable.

Functionally this part of ear is important for eyeglasses.

Graft using  is realized in larger defects than 2.5 cm., these are considered severe defects of auricle.

We choose to take cartilage from the septum because the size of defect was large and fitted better with the cartilage of chonchae, and in meantime patients had severe defects of septum and needed septoplasty.

During retroauricular dissection need to be careful to not pass temporoparietal fasciae, because of temporal branch of facial nerve is located underneath.

Cartilaginous graft is modeled in size and stitched with existing cartilage in order to fit better and placed in subcutan pocket created in retroauricular region.

Both skin edges anteriorly  and posteriorly stitched with the edge of retroauricular edge. Graft is fixed with suture in bashkimi and insertion place in order to prevent a hematoma. Auricle is treated every day, but is kept with bandage.

Sutures are removed after 10/14 days.  The second phase of intervention is performed after three months and consisted in dislocation of graft and cutan lembo.

In post intervention period we should be aware to avoid infections and graft absorption.

Small defects (<1.5 cm) of helix and antihelixes  are repaired approaching defect s edges and the wound is healed primarily. This technique create a smaller auricle from esthetic view.

Middle defects are defects that are limited in edges of helix and have the size of 2 cm. These defects can be closed through chondrocutaneus flap dislocation??, or composite graft can be used from the other side. Graft should have the size of half  defect in order to maintain the symmetry to the other ear.

In cases of larger defects of helix more than than 2.5 cm  we can close them using the technique of bipeduncular  flap and later on the flap can be removed and sutured in posterior margo of defect

In cases of upper part defects retroauricular skin is thick and hairy, so we should try to assicure as much as possible of retroauricle non hairy skin. This part of skin is furnished with blood from posterior branch of temporal superficial arterie.

This flap is thin and serves for feeding adapted cartilaginous graft with residual ear cartilage., which is placed underneath the skin and in the meantime does the communion   with the aid of skin revitalization  of the amputated ear.

Dislocation of the skin is more favorable after3,4  months and the ear is preserved from infection and followed up on the direction of  regeneration of the skin, recreated part and graft ongoing related to absorption.

In large defects providing the cartilage is possible from ear chonchae, cartilage from the rib or part from nasal septum.

Absorption of cartilage can happen in every moment and observation should be done at least for 2 months.

This technique has assured acceptable results and reconstructions of big partial amputations of 1/3 of auricle, without infections and graft absorption.

of defects involving the upper one-third of

13. Ferri M. Treatment of partial losses of the helix. Plast

involving the upper one-third of the auricle. Plast Reconstr